We are honoring Hispanic Heritage Month with Ilenia Santiago. Ilenia discusses how she made her journey as a young Latina from a small town in Puerto Rico to becoming a Master Practitioner at North Highland. Ilenia is also the co-founder of North Highland’s Latinx and Tribal Teams Elevation (LATTE) Employee Resource Group.

Sucheta: Ilenia, let’s begin by talking about your cultural background and how you grew up.

Ilenia: I was born and raised in Puerto Rico, and was surrounded by a tight-knit family with lots of uncles, aunts and cousins. Our social gatherings were very close with lots of food and anything we could do outdoors. Growing up in a really small town, San Sebastian, it was like you see on TV where everybody knows who you are. I went to college in Puerto Rico for my bachelor’s degree in chemical engineering and once I graduated, I came to the States and started working in consulting. Initially, I meant to come to the U.S. for a year and then go back to Puerto Rico but I ended up staying for over 20 years.

Sucheta: What drew you to a career in consulting after college?

Ilenia: The Big Four came to recruit in Puerto Rico and I didn’t know exactly what it was but I was fascinated by the opportunity to go to a client, do a project and then once you’re done, move onto the next. I felt like I was never going to be bored and liked the continuous learning aspect.

Sucheta: You seemed drawn in by the fast pace of the consulting world. Did growing up in island life in Puerto Rico make you crave a faster pace?

Ilenia: Yes, absolutely. I knew that I wanted to come to the States and experience big city living and see the world. Random things like being able to order takeout at any point in time at night, taxis and mass transit. I wanted to experience this! Also, being an American citizen and not having restrictions on working here like some other Latinos, I wanted to take advantage of that.

Sucheta: As a Puerto Rican woman, what was your initial experience in consulting?

Ilenia: I was part of the first recruiting cohort that came from the same university in Puerto Rico. There were customs among our cohort that we would engage in when we would see each other at the firm. For example, you see someone and give them a hug or kiss on the cheeks as part of our cultural norms. This shocked so many people and we started hearing “You can’t do that” messaging. That’s the first big encounter I had with a culture clash. I also got a lot of “Oh my God, your English is so great”. Someone once asked me how long it took me to drive from Puerto Rico and I’m like it’s an island in the middle of the ocean! Maybe the right thing for me to do at the time was educate but I learned to disregard because at the time I thought, “Why even bother?”

Sucheta: Can you tell me about a time you helped foster cultural acceptance, especially as it related to your professional life?

Ilenia: I've helped create Latinx ERGs in the past. I remember doing a class about Latino culture because people didn’t understand my full name, Ilenia Santiago Gonzalez. I just go by Santiago professionally because again, I’m assimilating and it makes it easier for people. Otherwise, I get 20 questions about my husband and I have to explain that I’m not married. I did the class because people couldn’t understand why I have both of my parents’ last names and why my mom didn’t take my dad’s last name.

Sucheta: This is just mind-blowing to me because I don’t see this as being specific to Puerto Rican or Latinx culture. I know plenty of female professionals who haven’t taken their husband’s last name, including myself. It’s more of a complete conformity to the patriarchy and here you are not only explaining your culture but also anti-patriarchy.

Ilenia: Exactly and it was really funny to see so many women that didn’t understand. For me, it was just a cultural thing. It opened my eyes to these cultural and racial differences that I was being subjected to. A lot of it was me trying not to ruffle feathers and I didn’t realize I was doing so much assimilating until much later in life and came to North Highland. When I was in my second year here, I was part of a panel discussion and I was sharing my experiences as a Latinx individual. It wasn’t until I was preparing for that event that I started thinking about all of my experiences.  I had another shattering moment because I thought to myself, “Oh my God, you have kept so much of who you are and your identity to yourself.”

Sucheta: One of the things that we spoke about in our recent Cost of Assimilation ERG event was code-switching. When you came across other Latinx colleagues, did you feel like you were code-switching?

Ilenia: I did but I also found myself telling my other Latinx friends that I felt it was rude when we spoke in Spanish at work. Then a friend of mine said,

“I hear you but there are things I want to say to you that I cannot express in the English language.” That to me was very powerful because there are some words that don’t have a direct translation and I started allowing myself to code-switch more.

Its ok to flip back and forth and its not necessarily rude or a bad thing. Before then, it was Ilenia, the professional English speaker because I wanted to make sure that I fit in so badly. My friend made me realize its ok to let your guard down, to be a little loud and use the Spanish language.

Sucheta: How did you feel when you came to North Highland? Do you feel like you’ve now integrated your cultural identity again?

Ilenia: I definitely feel more comfortable to be myself.  I feel like North Highland has a movement to be inclusive and people here want to learn and understand about people. Whereas early in my career, I don’t necessarily think I could say that people wanted to learn and understand and to me, that’s really powerful. If someone doesn’t understand, then at least I can explain and I can help you.

Sucheta: You’re in a leadership role as a Master Practitioner at North Highland. How does your identity help inform the work that you do and your work with clients?

Ilenia: I deal with people, their behavior, how they think. We leverage behavioral science in the work that we do and help people clearly understand better what they need to change. Bringing in the point of view of different cultures and ways of thinking influences change management. For me, it is also giving a voice to other Latinx consultants that are not necessarily in a leadership position. That is one of the reasons we first started LATTE (Latinx and Tribal Teams Elevation) because we don’t have many Latinx individuals in leadership positions. I want to make sure that there is better representation.

Sucheta: Last question – how are you celebrating Hispanic Heritage Month?

Ilenia: To be honest, I didn’t celebrate it in years past. I was so focused on assimilating so I never did. This year, I’m doing a full traditional Puerto Rican feast and watching In the Heights. It’s such an amazing movie. I remember the first time I saw In the Heights with Lin-Manuel Miranda and I was just blown away. I came out of the movie theater like “Oh my God, we Latinos are amazing!”

Ilenia has over 20 years of experience in helping organizations manage the changes that come with strategic initiatives, business and technology transformations, and organizational changes. She has expertise in designing change management strategies and processes that help organizations anticipate their needs and minimize change impacts. 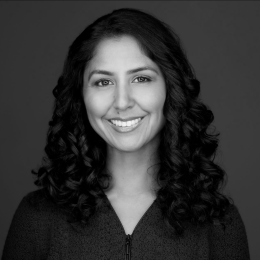 Based in Denver, Misra leads the firm's inclusion and diversity programs as well as its community social impact strategies. Prior to joining North Highland, Misra was Associate Director of Public Interest for the University of Illinois at Chicago Law where she increased engagement in social impact and resolved complex DEI barriers.