4 Energizing Revelations for the Utilities Industry

Utilities are the silent enablers of our modern way of life. Every time a switch is flipped, or a computer is powered on, a utility partner is instrumental in making it happen by delivering a jolt of electricity through highly-complex power grids. Now, the utility industry is facing critical challenges driven by impending, mandatory evolution to meet energy needs and public opinion demands – while lacking the necessary internal direction to meet such goals.

In North Highland's annual Beacon survey, seven percent of utilities are expecting a decline in revenue during 2019, four percent higher than other industries surveyed: Retail, Consumer Packaged Goods, Healthcare – Payor, Healthcare - Life Sciences, Energy, Media, Entertainment & Communications, and Financial Services. Despite this reality, the overwhelming sentiment of leaders is "proud," demonstrating their long-standing commitment to the industry and belief in what lies ahead. 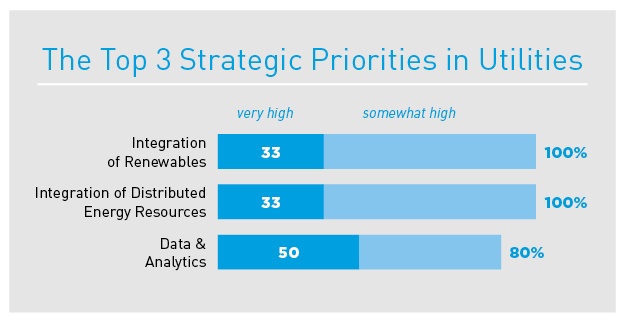 Integration of renewables and integration of distributed energy sources are by far the most important priorities for utility leaders as they head into 2019; 100 percent of respondents deemed integration at least "somewhat high." Data and Analytics (D&A) follows behind with 80 percent indicating it was a "somewhat high" priority, aligning with several other industries surveyed. 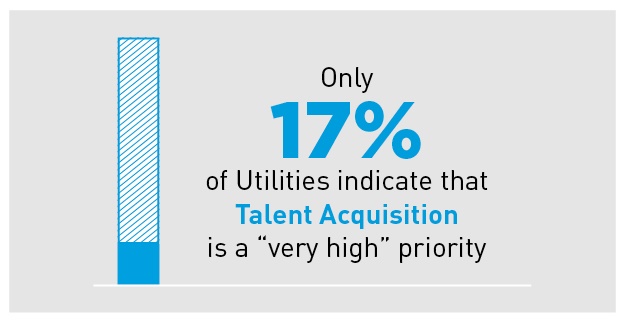 An aging workforce affects the utilities industry more than many others – talent is retiring out of the labor pool and replacements are not filtering in at the necessary rate. Human-centric issues like workforce replacement are going to be critical in the coming years, but only 17 percent of utilities indicate that talent acquisition is a “very high” priority.
Autonomous mobility/smart city planning is unique for utilities as it's seen as a competitive advantage if achieved; interestingly, it is also considered the most affordable initiative. D&A is also viewed as a competitive advantage but seen as costlier than autonomous mobility/smart city planning. Both strategic priorities are the only initiatives that 100 percent of utility leadership indicate as at least “somewhat” of a competitive advantage.

Adding Utility to Our Utilities

Utilities are feeling the heat to integrate modern, eco-friendly energy sources into their business models, not only for power generation but for power sharing as well. Outdated grids and adapting to new technology are just two challenges utilities are expected to face in meeting the demands of consumers.

The rise of electric vehicles (EV) presents an opportunity. As increasing numbers of car manufacturers are producing EVs as a substantial (or in the case of Tesla Motors, entire) part of their lineups, there is a correlating need for more electric power that utilities can provide.

The world-wide EV market grew by 50 percent between 2016 and 2017, greatly increasing the need for dynamic power solutions in a relatively short amount of time by long-term planning standards. Waiting to react to the definite future market demands of the EV revolution is a recipe for disaster. Reinforcing proactive planning habits now can save operational headaches and damages to revenue that can result later from slow adaption.

Keeping the Lights on with CX

Customer experience (CX) is an increasingly important priority within the utility market; however, 0 percent of respondents are "very prepared" to address this need. Much like other industries, human issues and CX are very relevant to utilities – after all, they do rely on engaged consumers to continue operations. It’s only possible to distribute as much power as consumers demand, so keeping operating efficiencies and user satisfaction high are critically important. With the influx of solar panels and other renewable options, consumers have a growing opportunity to take power generation into their own hands, so the utility industry must be more attuned than ever to CX.

Power grids are vulnerable. This is a known fact by utilities and governments around the world. Even though it’s an important initiative, 92 percent of survey respondents think cybersecurity is going to be at least "somewhat costly" to resolve, the second-most expensive perceived priority to accomplish.

Existing power grids are regularly targeted for potential attacks. Other countries and organized criminals have already attempted to, or enacted disruption to, utilities in the United States. To date, there hasn't been lasting damage, but the breaches demonstrate that a determined actor has the potential to cause irreparable harm if he or she has the right skill and resources.

North Highland’s research indicates that 50 percent of utilities are “very prepared” to integrate renewables, but it's also the priority that most respondents indicated would be "very costly” to resolve. Since the public's perception of the renewable energy industry has skyrocketed in recent years –  reaching astounding support, even if it means an increase in utility bills – companies are considering how to integrate renewables into current business models.

In addition to renewable power generation, utilities are grappling with power buyback as home-based solar panels become progressively popular – with solar installations in the U.S. expected to nearly double by 2022. Utilities may be able to buy back excess energy from customers, but only if their infrastructures will allow.

In an example of a transformative infrastructure decision, Scottish Power recently sold its last fossil fuel-burning power plant and now relies on 100 percent renewable wind energy – a trend utilities across the world are shifting to as customers demand new energy technologies.

Long-term planning, addressing customer needs, and focusing on the human experience will all boost the utilities industry in 2019 and beyond. Cleaner, more cost-effective methods of power generation and emerging customer demands will drive the direction of the industry, but it’s clear now, more than ever, that innovation and a focus on CX will energize utilities to achieve success.

Tom Brim has 20 years of leadership and management consulting experience. He has worked directly for group unit leads and chief operating officers at large organizations to translate and support the execution of strategies by leading complex initiatives. Tom specializes in the electrical utilities space with a focus on distributed energy resources