Scientific research argues that social norms are a necessary part of our identity and evolutionary existence - that our survival has always depended on individuals coming together to live, work, and govern. Most people, most of the time, conform to ‘the norm’ because we want to be liked and accepted. Harnessing the power of social norms, our blog series looks at the role that norms can play in shaping higher-value change management outcomes.

In the last installment of our series, we unpacked the principles of Social Proof and how they can be applied to the world of work. Now, we’ll examine more deeply the role that timing and messaging plays in forming the norms that lead to lasting change management success.

Research shows that social norms have a stronger influence and are more likely to prevail under conditions of uncertainty and change. When we are unsure, we look to others for how to act.

Revisiting part one in our series, let’s say you did end up eating at that busy restaurant in that unfamiliar city. You order an exotic dish you never tried before. As the food arrives, the waiter places unfamiliar cutlery on the table – you don’t know what it’s for or how to use it. However, the people next to you are enjoying the same dish. Chances are, you will watch what they do and follow suit.

In organisations, times of uncertainty and change offer a great persuasive lever that can be used to kick-start a new norm. Whether it’s following the announcement of a new operating model or the launch of a new service or product, the sense of ‘new’ can be used to unite everyone involved and set a precedent for what is expected in unfamiliar territory.

For similar reasons, if you want to disrupt a norm and break a vicious cycle of bad behaviours, consider delivering your message in an unfamiliar environment where everyone is away from their routines and feels slightly outside of their comfort zones. Another reason to organise that out of office Away Day!

When trying to build a new social norm, messaging is key. Field experiments on political behaviours show that interpersonal interactions and small incentives are particularly influential when encouraging people to vote, especially when coupled with elements of Social Proof (e.g. “if my neighbour voted, I will too”). Implying that a norm is already established in your messaging is in fact one of the best ways to make sure it continues. Robert Cialdini ran a series of experiments which found that when guests staying in a hotel room for multiple nights were told that others on their floor reused their bath towels (instead of giving them to housekeeping to clean on a daily basis), they were more likely to reuse them compared to when the messaging was about the positive impact on the environment. Apparently, we care more about what others are doing than the health of our own planet!

However, this knowledge of Social Proof should be used with caution. Research shows us that if the messaging highlights that the majority are acting in an undesirable way, this can have a similar but undesired effect on people’s behaviour. When the Petrified Forest National Park in Arizona decided to discourage people from stealing petrified wood, they used the following message: “Your heritage is being vandalized every day by theft losses of petrified wood of 14 tons a year, mostly a small piece at a time.” In doing so, they unintentionally encouraged thievery by making it appear commonplace. Unsurprisingly, this led to more people stealing wood… another example of disregard for the health of our planet!

Take care when choosing your messenger

People we respect, or those who occupy positions of power, are more likely to deliver messages that resonate with us than those who don’t. In general, we implicitly associate views and actions of powerful people with the authority they hold and assume that acting in line with them may be to our benefit. At the same time, we are also influenced by those we identify with or associate with regularly (e.g those in our physical proximity, similar to us or in similar circumstances). When choosing who will deliver the message so that your change initiative becomes a norm, cascade your messaging not only from sources of authority (e.g. managers and senior leadership), but also from others with “soft” power (e.g. respected colleagues and role models) and relevant communities people associate with (e.g. communities of practice or peer groups of interest such as the Running Club).

So where should you start?

These are just a few of some of the many approaches you can try to help build a ‘swell’ and new social norm for your change initiative. But now that you have some ideas drafted and an outline strategy in place, how do you plan where to start? Research shows that you can change the behavioural norms of a group by changing the behaviour of just 25 percent of people within it. So start small. Identify the 25 percent of people who are most willing and open to change, but also have the strongest networks and connections across your group, and focus efforts on this group first.

All that’s left to do now is to select the ‘norm’ you want to take hold and how to go about it in a way that’s ethical and transparent. An important point to consider is whether these tools are used with good intentions – to increase well-being and build social norms that people generally agree on.

At the end of the day, it all boils down to a few key questions: What behaviours will have the greatest impact and benefit to your business? What is it that you wish people would do more? Are there any guiding principles you need to keep in mind when deciding on which social norm should be built?

Darya is a Manager and a member of the firm’s People & Change practice. She is an organizational psychologist with over seven years of consulting experience. Her expertise includes talent management and HR. She is experienced in helping HR functions define and articulate a compelling vision and value proposition, set priorities, design their operating models, and manage change and communications. 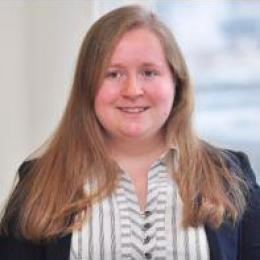 Elisabeth is an Associate Vice President at North Highland, leading the firm’s Change Management practice. She is an expert in advising clients on their large transformation programs, including setting change strategy, running change diagnostics, and mobilizing change networks. Elisabeth is skilled in building change capability through blended teams to help clients maximize value and achieve their strategic aspirations.